Proven Results – Research Findings
“
Just as the size of the group achieved the size needed to produce a demonstrable effect, there was a highly statistically significant drop in crime that went away when the group dispersed.”
—John Hagelin Ph.D

Over the past 30 years, 50 demonstration projects and 23 published studies have verified the efficacy of this approach to reducing violence and conflict in society. These studies were published in prestigious peer-reviewed scientific journals such as the Journal of Conflict Resolution, Social Indicators Journal and Journal of Mind and Behavior. (Click for a bibliography of studies)

During the 1980’s Lebanon war, research indicated a 76% drop in war deaths among other findings.

A critical experimental test of the approach used by the Global Peace Initiative was conducted during the peak of the Lebanon war. A day-by-day study of a two-month assembly of people practicing advanced Transcendental Meditation in Israel in 1983 showed that, on days when the number of participants (“TM Group Size,” right axis in chart below) was high, war deaths in neighboring Lebanon dropped by 76% (p < 10–7). In addition, crime, traffic accidents, fires, and other indicators of social stress in Israel (combined into a Composite Index) all correlated strongly with changes in the size of the peace-creating group. Other possible causes (weekends, holidays, weather, etc.) were statistically controlled for.

Changes in the quality of life in Israel correlate with changes in the numbers of people practicing the Transcendental Meditation and TM-Sidhi program (Orme-Johnson et al, 1988) 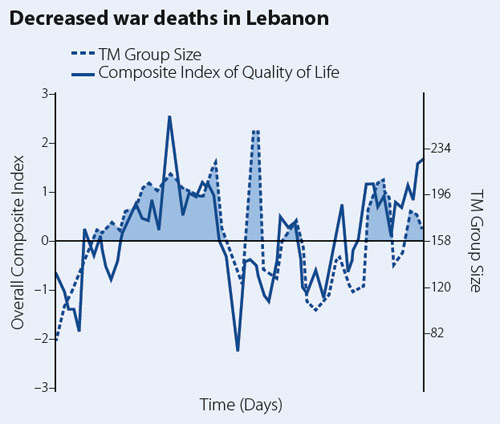 These results were subsequently replicated in nine consecutive experiments over a two-year period during the peak of the Lebanon war. The results of these interventions included:

The likelihood that these combined results were due to chance is less than one part in 1019, making this approach of reducing societal stress and conflict the most rigorously established approach in the history of conflict management.

The global influence on terrorism of three large peace-creating assemblies was studied retrospectively through an analysis of data compiled by the Rand Corporation. The data revealed a 72% reduction in worldwide terrorism during the three assemblies taken together, as compared to all other weeks during a two-year period. Each assembly had approached or exceeded the participation threshold (square root of 1% of the world’s population) predicted to create a global influence of peace. The study ruled out the possibility that this reduction in terrorism was due to cycles, trends, or drifts in the measures used, or to seasonal changes.

Drop in Crime by 23% during a two month demonstration project in Washington D.C.

A National Demonstration Project conducted in Washington, D.C., from June 7 to July 30, 1993, tested the efficacy of the Global Peace Initiative’s approach to reducing crime and social stress and improving the effectiveness of government.

In this carefully controlled experiment, the peace-creating group increased from 800 to 4,000 over the two-month period. Although violent crime had been steadily increasing during the first five months of the year, soon after the start of the study, violent crime (measured by FBI Uniform Crime Statistics) began decreasing and continued to drop until the end of the experiment (maximum decrease 23.3%), after which it began to rise again. The likelihood that this result could be attributed to chance variation in crime levels was less than two parts per billion (p < .000000002). The drop in crime could not be attributed to other possible causes, including temperature, precipitation, weekends, and police and community anti-crime activities.