The Project – The Formula
The number of peace experts required to create peace globally is 9,000.”

The Global Peace Initiative involves establishing and permanently maintaining a group of 9,000 experts who practice together the advanced meditation techniques of Transcendental Meditation and TM-Sidhis (see below). Scientific research has found that this group meditation practice creates a measurable influence of peace in society

Research studies have determined that even with just the square root of 1% of a population engaged in group practice of these powerful meditation techniques, stress in society is reduced. Less societal stress results in a decrease of violence and conflict.

The number required to create peace globally is 9,000, which is approximately the square root of 1% of the world’s population of seven billion. This is the critical number needed to reduce stress on a global scale. Nine thousand peace-creating experts can transform the quality of world consciousness, resulting in more peaceful and positive trends worldwide. This formula is based on a principle of nature’s functioning called the N2 effect.

(Read more about An Ancient Profession)

TRANSCENDENTAL MEDITATION AND TM-SIDHI PROGRAM — A TECHNOLOGY OF CONSCIOUSNESS

The Transcendental Meditation® (TM) technique is a simple, natural, effortless procedure practiced 20 minutes twice each day while sitting comfortably with the eyes closed. It’s not a religion, philosophy, or lifestyle. More than six million people worldwide have learned the TM technique — people of all ages, cultures, and religions.

During the practice of TM, the mind effortlessly settles down beyond thought to experience the source of thought — pure awareness, also known as Transcendental Consciousness. This has been recognized by researchers as a fourth major state of consciousness, a state of restful alertness, distinct from the other three states of consciousness, waking, dreaming and sleeping.

The experience of this fourth state of consciousness is at the basis of the wide range of benefits that have been found to accrue through the practice of TM. More than 600 scientific studies conducted at 250 independent universities and medical schools in 33 countries during the past 40 years have documented the profound benefits of the Transcendental Meditation technique on all aspects of life – mind, body and behavior. 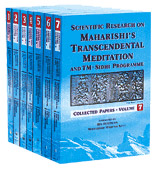 The Transcendental Meditation Sidhi Program (TM-Sidhi® Program) is an advanced meditation practice that cultures the ability to think and act from this most powerful and unified level of consciousness — Transcendental Consciousness — which is the source of nature’s creativity and intelligence. By learning to function from this level of consciousness, the mind begins to harness the organizing intelligence of nature. Maharishi Mahesh Yogi explains that the TM-Sidhi program, by promoting this inner experience, allows thought and action to spontaneously become more in accord with the evolutionary power of natural law. Practice of the TM-Sidhi program thus accelerates the progress of individuals toward the realization of their full potential — the state of enlightenment. In addition, a group of people practicing the TM-Sidhi program together creates an influence of peace and promotes the evolution of everyone in the environment.